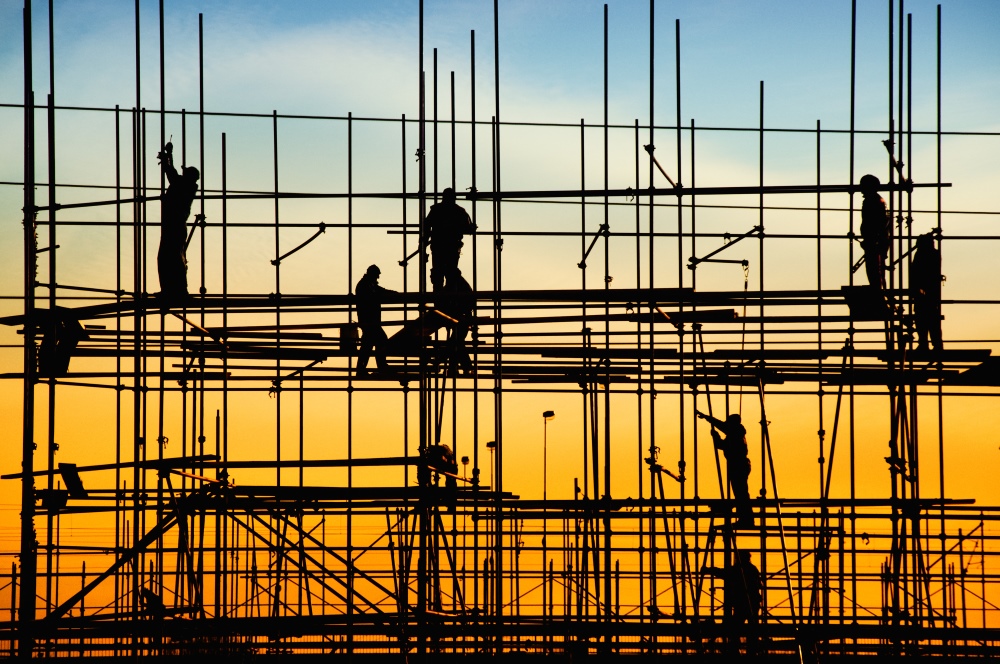 In this guide, we will be providing information on specific kinds of scaffolds and scaffolding. In addition, will provide practical examples that show how to control some of the common risks that are associated with using scaffolding. This guide belongs to a larger series of guidance materials so can be considered a basic guide in itself. Ideally, it should be read and used together along with the general guidelines for scaffolding work as well as scaffolds. That includes risk management information and advice on planning, altering, erecting, dismantling, as well as working with scaffolding, along with measures that help to control risk that is discussed in this guide.

With this in mind, let’s take a look now at the various types of scaffolds and scaffolding.

This is an independent type of scaffold that is comprised of over 2 rows of standards in both directions that are connected by ledgers and transoms. The birdcage scaffold is mainly used for work being done on a ceiling or other single level. It is very important to consult with the specifications from the designer or manufacturer when a birdcage scaffold is being erected or dismantled that is made out of modular scaffolding.

The following risk control measures should be implemented for birdcage scaffolding that is made out of coupler and tube scaffolding.

Usually, fall arrest systems are not the best risk control measure when erecting or dismantling perimeter or birdcage scaffolds.

This type of scaffold is assembled out of prefabricated accessories, trestles, and braces. Trestle scaffolds, including H-frame and A-frame trestle scaffolds, typically are used by bricklayers, plasterers, painters, and general finishing and fit-out projects. For erecting or dismantling a trestle scaffold, usually, a licensed scaffolder is not required.

However, only a competent individual should dismantle or erect a trestle scaffold. It should be done in a progressive manner to ensure the installer’s safety along with the entire structure’s stability. To attach the braces to trestles, the instructions provided by the manufacturer or supplier should be followed.

As the trestle’s height continues to increase, there is a greater need to provide the trestles with lateral stability. An appropriate foundation should be used to erect a trestle scaffold on, and it should be stable enough to ensure that it can safely distribute and carry loads such as materials and workers on each of the trestles. Measures to stop possible toppling and control instability include using ties or outriggers on a permanent structure.

A trestle scaffolds also should be able to:

Note: The full width of the trestle ideally should be planked irrespective of what the duty rating is.

Most bracing systems used on tubular trestle scaffolds are made out of light materials that can be damaged easily by misuse or abuse. That is why great care needs to be taken during the assembling and dismantling processes. Under no circumstances should anyone climb the braces or trestles. Edge protection requirements are not satisfied by cross-braces that are part of trestle scaffolding.

A hanging scaffold or hung scaffold is a type of independent scaffold. They hang from a separate structure but are incapable of being raised or lowered while they are being used.

For a hung scaffold, consider implementing the following control measures:

This type of scaffold is comprised of one row of standards connected by ledgers. Then putlogs are fixed to the ledgers and also built into the building wall or structures. This kind of scaffold will depend on the structure it is placed against for support. It is very important to make sure that none of the single pole scaffold components is removed before it is dismantled.

A suspended platform is incorporated by this type of scaffold that can be raised or lowered when in use. A great example of a suspended scaffold is a swing-stage scaffold.

Heavy duty or special scaffold, at a bare minimum, should be used in the demolition process, to provide edge protection and a safe working platform as well as to contain dislodged materials.

Factors that might affect a scaffold’s stability for demolition work include the following:

This type of scaffold has a specific design load for a particular scaffold. These scaffolds differ from other types of scaffold working platforms with typical heavy duty, medium or light ratings. They have a maximum load rating and standardised minimum dimensions.

The following risk control measures should be implemented when using a cantilevered scaffold:

The following methods should be used for fixing the inboard length of the cantilevered beam to the structure:

This type of scaffold is a system that receives support from a frame on a structure or building. Sometimes it is in an upside down L shape, where one arm is attached to a vertical surface and the other is protruding horizontally in order to provide the scaffold planks with support. Other types of hanging bracket scaffold systems might include horizontal embers supported by structures such as building floors.

For hanging bracket scaffolds it is very important that the following risk control measures be implemented:

Note: that does not refer to planks overlapped on putlogs.

Inclined load-bearing members support this type of scaffold. For spur scaffolds, you need to implement the following control measures:

This type of scaffolding is built out of tubing and joined or fixed components that are attached to together to create the scaffold design that is desired. This type of scaffolding is frequently used on structures that have an unusual function, design, or shape. The versatility of this kind of scaffolding means it may be assembled in different configurations. This also means that it can be more complex to erect this type of scaffold than a prefabricated one. The load that coupler and tuber scaffolding are able to carry is determined by the strength and diameter of the tube in addition to the components that are used. If plain steel tubes are incorporated into a scaffold, the design and analysis must take the most adverse combination of the tubes by wall thickness or strength of the tube material or both into consideration. One scaffold should never mix steel and aluminium tubes. Tubes that have different wall thicknesses should not be interconnected using end-to-end internal-type spigots or couplers unless there are additional measures taken to secure the joint.

For example, a short tube with swivel couplers may be fixed parallel to and over the joint. Or a bridle can be fixed with right-angled couplers to the adjacent members. Metal coupler and tube components need to be inspected on a regular basis for damage. There should be special attention paid to corrosion, splitting, crushing, deformation, and cracks.

If you are looking for knowledgeable and experienced scaffolders, who have leading-hands that work together with you and offer expert advice, please contact us at Skelscaff today on 1300 266 607 or email us at contact@skelscaff.com.au.